How to Track Credit Card Skimmers

Posted by Rebecca Prince on December 9, 2016

Christmas is about 16 days away! And if you’re a procrastinator like me, you’ve probably shifted into serious Christmas shopping mode.

Enter the bad guys stage left. The identity thieves. They’re after your debit and credit card information. And the holidays, well that’s their prime hunting season.

So how can you stay safe from the holiday scammers?  Here are a few tips from the staff writers at komando.com.

One of the more successful tools of 21st century crooks is the skimmer. Thieves attach them to ATMs, gas pumps, and other places people swipe their credit and debit cards. Once in place, this sneaky bit of electronics steals the magnetic strip information from your card.

The thieves use this information to clone your card. And once they have a clone, they can drain your bank account or run up huge bills and trash your credit before you even know it. That's one reason credit card companies and stores are switching to EMV cards, but it will take a while before every retailer has them.

Using skimmers, individual thieves and groups have stolen millions of dollars. Last year, four men were arrested for allegedly stealing $2.1 million using skimmers at gas stations across the South. Let's say the average gas transaction was $50. To rake in $2.1 million, they needed to skim approximately 42,000 transactions of people buying gas.

It doesn't help that skimmers are available for sale to anyone who wants to buy them, so they can show up anywhere. Just glancing at the news for the last few months shows that skimmers were found at dozens of local gas stations in Detroit, St. Louis, various sites in Cincinnati, cities in Florida, and ATMs at banks around the country. Police say that ATM skimmer use has tripled in Queens, New York.

If you had any doubts, skimmers are out there and can be anywhere. So, how do you spot a skimmer before it snags your information? We're going to tell you.

An overlay skimmer is one that fits over the card reader slot of an ATM or gas pump. For old or low-quality overlay skimmers, there are a few things you can look for.

It's usually modeled, or in some cases 3-D printed, to look like the part it's covering. However, it might not be the same quality or color as the rest of the machine. Maybe it's protruding a bit too far, or not installed straight. If it looks like it doesn't quite fit, then that's a possible warning.

You can also look around for additions to the machine that could hide a camera pointed at the keypad. This is often how crooks get your PIN. It might be installed on the ATM, or even above it.

That's the case with a skimmer a passenger recently discovered on a MetroCard Vending Machine in the New York subway. Here's the overlay part (after it was taken off the MVM): 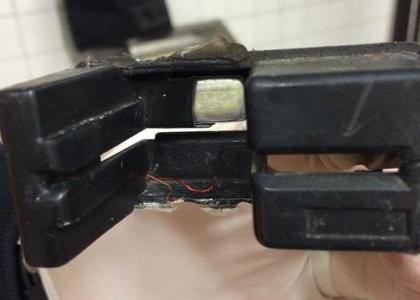 And here is the camera installed above the machine disguised as a plug. See the pinhole on the bottom for the camera lens?

For these types of skimmers, it's actually fairly easy to defeat them. Simply cover your hand when you're typing in your PIN and the crooks won't have all the information they need to clone your card.

Unfortunately, there are more advanced skimmers out there that are harder to spot. Some are actually impossible for you to catch. A good example comes from Brazil. It's an overlay skimmer, but instead of overlaying the card reader, the entire front of the ATM is fake.  The gas station pump thieves we told you about earlier hid their skimmers inside the pumps.

The skimmers were even equipped with Bluetooth so the thieves could drive by and extract the collected numbers and PINs wirelessly.

Another new type of skimmer is thin enough that it fits right inside the ATM or gas pump's card reader slot. There's no external sign it's there, but it's busy swiping your info.

Unscrupulous employees of a restaurant or store might have handheld skimmers that you'll never see. Or, they might put out POS terminals that are really skimmers in disguise; they'll even print out a receipt.

Not many crooks have these advanced skimmers yet, but they'll get less expensive and more widespread in a few years. Fortunately, as we said, banks and retailers are switching over to EMV cards that have a chip instead of a magnetic strip.

In the meantime, you should try avoiding the places most likely to have skimmers. When visiting gas stations, restaurants, or shopping online – use cash or your credit card, so thieves can’t access your account directly.

You should also set up text alerts on your cards, so you know when you or anyone else swipes them. You can tell right away if hackers have stolen your information.

How DuGood Can Help

We want you to feel good about shopping during the holiday season – because we have your back! Our credit cards come with FREE Identity Theft Protection, which can be added to your debit card too for just a few bucks a month.

Also, be sure to check out CardValet. It’s a FREE app that allows you to monitor your debit card transactions. You’ll receive a notification every time your card is used. And if you lose your card or suspect fraud, you can turn your debit card on and off with a simple swipe.

Now, go forth and conquer the Christmas shopping season. We’ll be looking out for you!